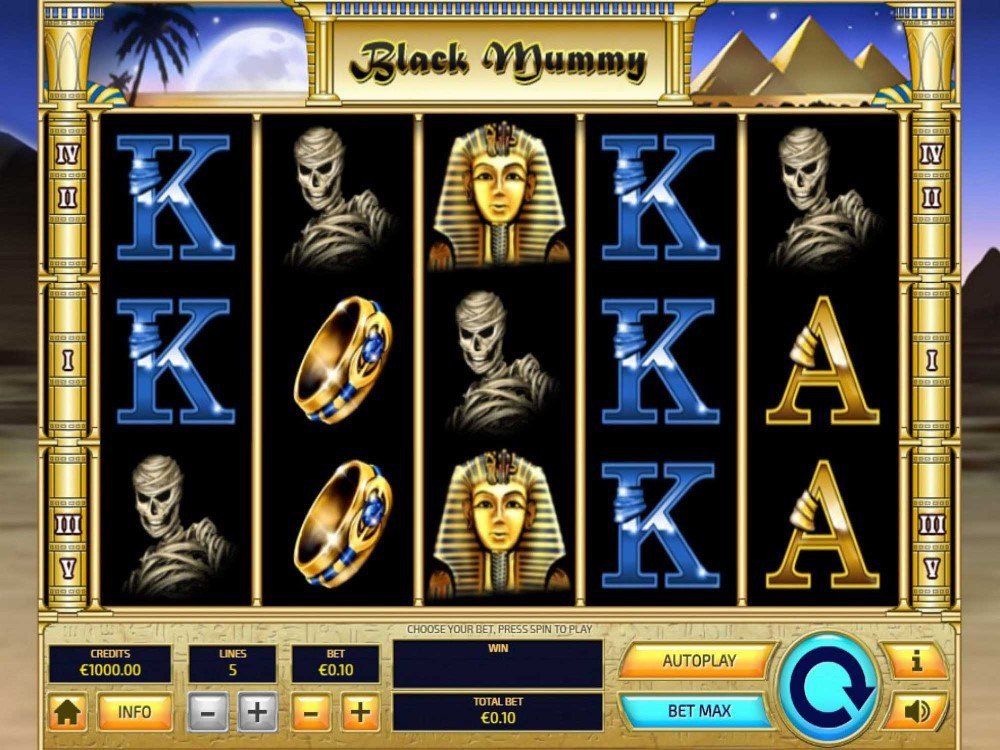 In this game, the theme is explored with simple graphics, a 96% RTP and medium volatility. With a total of 5 fixed paylines, it takes some patience for the mummy, reborn after thousands of years, to bring good wins.

The combination of volatility and few paylines makes Black Mummy slot a long-term bet. That is, bets between 0.10 and 100.00 coins should stretch over several spins in search of expressive returns. Overall, there has not been much investment in the graphics, and it is one of Tom Horn’s simpler games.

What are the best Black Mummy symbols?

The awakening of the black mummy made it a Wild in Black Mummy game, as well as the best symbol in the game. Should it manage to collect five repeats on a payline, the mummy can pay out up to 100x the bet. However, as Wild, this is clearly not its best feature.

Among the symbols that can be substituted, the ones with the highest payouts are the sarcophagus and the Eye of Horus. Unlike other slots from Tom Horn and other developers in general, low symbols have their turn in the Black Mummy game.

If the mummy is combined with one of the low card symbols, it multiplies the winnings. They range from x3 to x5 the total won in the combination, the only spin bonus the game offers, as it does not feature free spins.

Players who are not satisfied with the Wild multiplier bonus in Black Mummy can still seek an alternative. Present in other Tom Horn slots, such as 243 Crystal Fruits, it is possible to gamble the winnings from combinations. Simply choose between red or black, up to a total of five times.

If you get it right, you double any winnings. Mistakes, however, compromise the entire round’s winnings.

Who is Black Mummy game for?

With a reasonable RTP of 96%, Black Mummy doesn’t stand out for its bonuses. With only 5 paylines, combining the Wild with other symbols can generate good multiples. Should the player prefer free spins and similar bonuses, it might be a better idea to play Rise of Egypt Deluxe or Book of Ra Deluxe. Black Mummy is more simplistic in style, for those who really like to rely on luck.